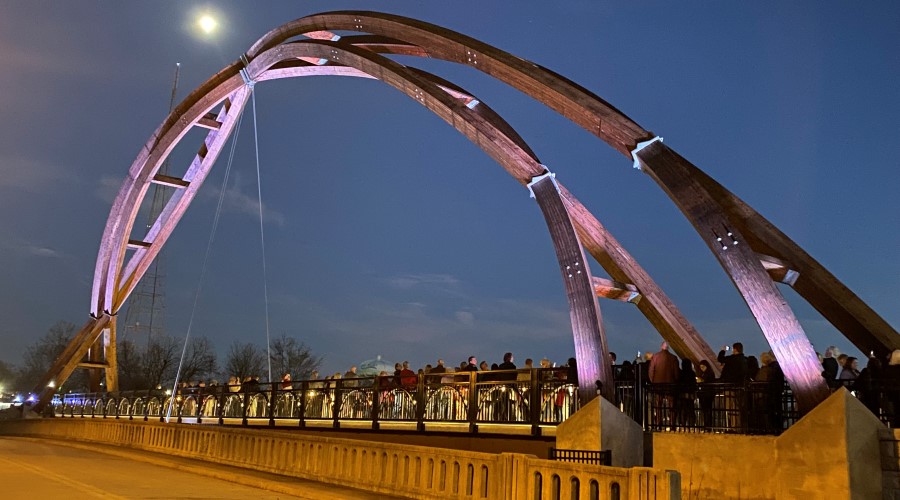 The year 2021 was another one for the history books with many milestones and accomplishments celebrated. As we embark on a new year, let’s reflect back on the City of Hickory’s top highlights of the previous year.

Airport Hangar: On March 9, 2021, Hickory City Council and the Burke County Board of Commissioners approved a memorandum of understanding for a partnership to construct a new 12,000-square-foot airplane hangar at the Hickory Regional Airport in Burke County.

MetroNet: On April 7, 2021, MetroNet and the City of Hickory announced a partnership that will soon bring MetroNet’s 100 percent fiber optic internet, TV, and phone to businesses and residents. MetroNet will invest more than $36 million in the city and surrounding community while bringing fiber-to-the-home directly to residents. Construction of the fiber network should begin in early 2022.

Gusmer Enterprises: On April 12, 2021, Gusmer Enterprises, Inc. was announced as the fifth industrial tenant in the Trivium Corporate Center. Gusmer is now constructing a 135,000-square-foot manufacturing facility to produce liquid filtration media and devices which are used in the food, beverage, and pharmaceutical industries, including filtration products used in the production of COVID-19 treatments. Over five years, Gusmer will create 73 jobs and invest a minimum of $38.2 million in new facility construction, machinery, and equipment.

Downtown Public Wi-Fi: On June 1, 2021, a ribbon cutting was held on The CommScope Stage on Union Square to celebrate the activation of free public Wi-Fi. Downtown visitors have access to free Wi-Fi throughout the Union Square plaza thanks to a generous $275,000 product donation by Hickory-based CommScope. To connect to the public Wi-Fi, look for “DowntownHickory-PublicWiFi” in the list of available networks.

Trivium East: In June 2021, the Hickory City Council, Catawba County Board of Commissioners, and Trivium Board approved the purchase of 108 acres to expand the successful Trivium Corporate Center business park for further industrial development. The expansion will be known as Trivium East.

Zahra Baker Message Center: On October 21, 2021, the City of Hickory honored Invisible Disabilities Week and celebrated the installation of a new message center at Zahra Baker All Children’s Playground at Kiwanis Park. The new message center is dedicated to sharing information for individuals with disabilities and their caregivers, and is part of a larger City initiative known as the Community Enhancement Project for Individuals with Disabilities.

Bond Commission Tribute & Wyatt Bridge Dedication: On November 1, 2021, the City unveiled a special tribute on the City Walk to the Bond Commission and dedicated the Third Street pedestrian bridge as the Wyatt Bridge in special recognition of Burk Wyatt’s contribution of time, talent, and resources to the success of the Hickory bond program as chair of the Bond Implementation Commission.

City Walk Grand Opening & Rudy Wright Bridge Dedication: On December 16, 2021, the City of Hickory marked the historic grand opening of the City Walk with a ribbon cutting and held a special “Light It Up for Rudy” event to dedicate the iconic pedestrian bridge as the Rudy Wright Bridge in honor of late Hickory Mayor Glenn Rudolph “Rudy” Wright, Jr., who served Hickory as mayor for 16 years and was instrumental in the bond program. The City Walk is the first of five segments of the Hickory Trail, a 10-mile multiuse path that is designed to improve quality of life and drive economic development by connecting destinations across the city.

Stay connected to the City via social media and HickoryNC.gov throughout the year for more exciting news and information.