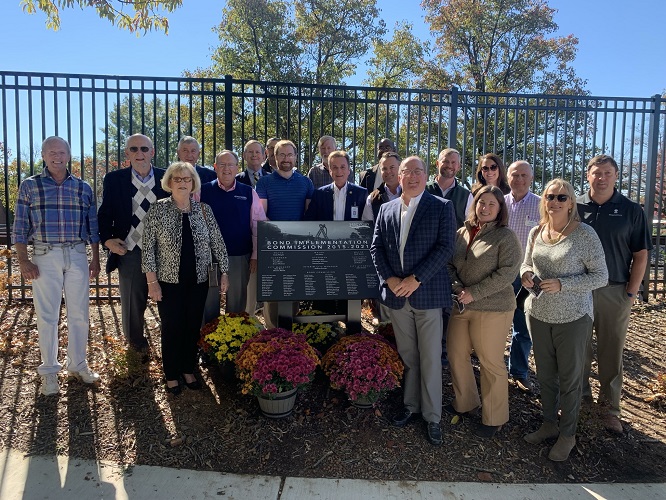 On Monday, November 1, the City of Hickory held a brief ceremony on the City Walk to celebrate the accomplishments of the bond program and recognize individuals in the community who have had a profound impact on improving Hickory through its revitalization efforts.

Shortly after the passing of Hickory’s bond referendum in November 2014, the Bond Implementation Commission was formed in April 2015 to share the voice of the community and help guide the bond projects from concept to design to fruition.

“Citizen involvement has been vitally important since the onset of the bond program,” said Mayor Guess. “The Bond Commission has played a significant role in the bond process by reviewing project design concepts, providing feedback to City staff and project partners, and ultimately making recommendations to the Hickory City Council on how to proceed.”

Guess continued, “Since the Commission’s formation in 2015, numerous Hickory citizens have stepped up and dedicated their time and talents to serve on the 42-member Bond Commission for the City of Hickory and help move the bond program forward. Their service, support, and passionate involvement in the bond program over the years has greatly contributed to the overall success we are now experiencing as a result of the bond projects.”

Following the unveiling of the tribute, the City dedicated and named the Third Street pedestrian bridge as the Wyatt Bridge in special recognition of Burk Wyatt’s contribution of time, talent, and resources to the success of the Hickory bond program as chair of the Bond Implementation Commission.

Plaques displayed on both ends of the bridge honor the Wyatt family - Frank (Burk) Wyatt and his wife, Brenda, and their children, Sydney, Frankie, and Eli.

North Carolina State Senator Dean Proctor was also in attendance at the event to present Burk Wyatt with The Order of the Long Leaf Pine, the highest honor awarded by the Office of the Governor.

The Order of the Long Leaf Pine is presented to honor persons who have made significant contributions to the state and their communities through their exemplary service and exceptional accomplishments.

“In his 25-year-tenure with Hickory-based CommScope, Burk helped guide the company to become a global leader in infrastructure solutions for communications networks. Yet he always made time to volunteer on numerous committees and organizations, sharing his expertise across the region. Through his professional career and civic service, he made many contributions to improve the Hickory community and promote economic development,” said Mayor Guess.

Wyatt has served as the chairman of the City of Hickory’s Bond Commission since its inception and has played an integral role in leading the group in its mission to enhance Hickory through several bond-funded catalyst projects.

“Thanks to his vision for the future and support of our revitalization efforts, Burk’s leadership has guided the Bond Commission over the years as we have watched ideas and plans turn into real-life amenities and economic development opportunities,” added Guess. “Burk Wyatt’s 34 years of service in North Carolina and dedication to improving the Hickory community through his leadership at CommScope and as the chair of the City’s Bond Implementation Commission make him a worthy recipient of The Order of the Long Leaf Pine.”

For more information about the City Walk and Hickory’s other bond projects, please visit www.CraftingHickory.com.