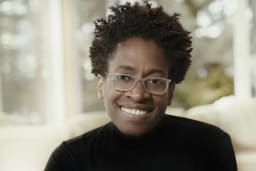 A national ambassador for young people, Jacqueline Woodson is an American children’s and young adult’s writer best known for “Miracle’s Boys” and her Newbery Honor-winning titles “Brown Girl Dreaming,” “After Tupac and D Foster,” “Feathers” and “Show Way.” After serving as the Young People’s Poet Laureate (2015-17), she was named the National Ambassador for Young People’s Literature, by the Library of Congress (2018-19). In addition to these awards, she has received the Margaret A. Edwards Award for Lifetime Achievement, Coretta Scott King Award, National Book Award, The Caldecott Medal and the Parents’ Choice Award.

As an author, Woodson’s known for the detailed physical landscapes she writes into each of her books as well as her exploration of issues such as gender, class, race, family and history.  She is known for using these common themes in ground-breaking ways. While many of her characters are given labels that make them “invisible” to society, Woodson is most often writing about their search for self rather than a search for equality or social justice. Her most recent book, Red at the Bone, explores sexual desire and identity, ambition, gentrification, education, class and status, and the life-altering facts of parenthood within the story of two families experiencing unexpected teen pregnancy.