First Presbyterian Church was formed when a group of interested Presbyterians petitioned the Concord Presbytery for the establishment of a congregation. In March 1873 a mission, called Gibbs' Mission, was established with a membership of fifteen. The Reverend G.M. Gibbs became the first minister, although the Hickory church had to share him with churches in Taylorsville and Wilkesboro. Gibbs remained in that capacity until 1878. It was also in that year that the church became known as the Hickory Presbyterian Church and construction of the first church building was completed. Prior to that time, the congregation had met in Hickory's Methodist church. The cost of the first building was $1,769. The church continued to grow under the leadership of ministers Thomas Thurston (1879-1884) and Colin Munroe (1885-1891). In 1891, with a membership of approximately one hundred, the church was able to secure the services of its first full-time pastor, J. Alston Ramsay, D.D. Ramsay was paid an annual salary of $900. Eighteen ninety-one also saw the creation of the local Woman's Missionary Society and the purchase of the first manse.

C.W. Trawick (1904-1907) was pastor when the new church building was completed. The structure was dedicated on December 2, 1906. John G. Garth took over the pastorate of the church in 1907. He remained until 1918. During his tenure a new manse was constructed and the church obtained it first pipe organ. In 1914 First Presbyterian Church hosted the annual convention of the North Carolina Synod. During this convention the Synod voted to create the Appalachia Synod, which would encompass mountain regions of North Carolina and other states. Edward Marshall Craig was pastor of the church from 1919 until 1925. Enrollment increased greatly during his pastorate, reaching a total membership of 335 in 1923.

Edward Craig left Hickory in December 1925, and First Presbyterian Church was without a regular pastor until February 1, 1927, when John Richards Hay, D.D., began the longest tenure in the church's history. He served for over twent-five years until September 1, 1952. During this period the church underwent considerable expansion. In 1928 a three-story education building was erected just west of the sanctuary at a cost of $28,000. In 1946 Sweetwater and Belk Memorial Presbyterian churches were organized, largely under the efforts of Dr. Hay and taking most of their membership from First Presbyterian. Despite the loss of members to the two new churches, membership at First Presbyterian continued to increase, from 372 in 1927 to 541 in 1952. In 1949 the sanctuary was remodeled and refurnished at a cost of $85,000.

Remaining downtown while other churches moved to the more residential areas of town, First Presbyterian Church has shared its facilities and resources with many groups and has played a leading role in the establishment and support of many of Hickory's community service programs. Built in 1905-1906, First Presbyterian Church is the most outstanding example of the Romanesque Revival style in Catawba County. The granite church is complemented by the 1928 three-story granite education building of Romanesque Revival influence and the modern two-story granite education building erected in 1957. Also on the property are the former manse%u2014a two-story frame house built in 1908%u2014and an adjacent playground.

First Presbyterian Church was designed by the Bowman Brothers architectural firm of Knoxville, Tennessee with Killian and Whitener (believed to have been a Hickory firm) serving as the contractor. Originally the church was to have been faced with brick, but the building committee decided in May of 1905 that "Belgian Block Veneer", a specific face cut of granite, should be used instead. 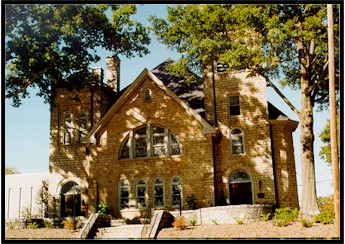