Designed by Christopher Gadsden Sayre, the former Claremont High School is one of Hickory’s most architecturally significant buildings. The school was built by contractor Jewell-Riddle Company of Sanford. The central block was originally used for classrooms and administrative offices; the west wing contained an auditorium and balcony on the second floor and a lunchroom and kitchen on the first floor; and the east wing held a first-floor shop and a second-floor gymnasium and balcony. The building is richly decorated with classical terra cotta ornamentation. Interior features include oak flooring, molded plaster cornices in the entry hall, and classical ornamentation including a coffered ceiling in the auditorium. 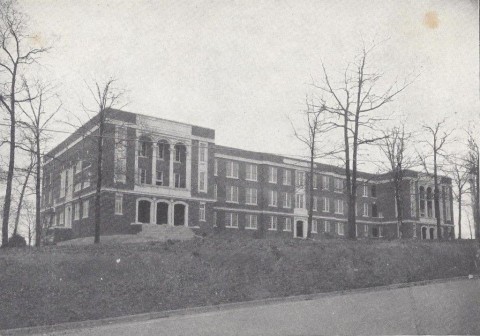 Claremont High School opened on October 9, 1925, the fourth public school in the city’s school system. Built on the site of the Claremont Female College, which operated on this site from 1880 to 1916, it continued the educational and cultural activities long associated with the neighborhood. In 1881 Henry W. Robinson sold the trustees of Claremont Female College twenty-two acres of land. When the college closed in 1916, the site was vacant until the Corinth Reformed Church offered it to the city contingent on the construction of a school.

In the early 1980s, it was suggested that this school be turned into an arts center. Through community efforts, the school building was converted into an outstanding arts complex known as the Arts Center of Catawba Valley. Today, the eastern side of the main building houses the Hickory Museum of Art, and the western side is the home of the Catawba Science Center. The Catawba County Council for the Arts offices are located in an annex to the west. The offices of the Western Piedmont Symphony and the Hickory Choral Society are now located in the buildings just west of Carpenter Hall. In 1984 the former Claremont High School was designated as a local landmark by the City of Hickory and the following year listed on the National Register of Historic Places. In recent years, the building was named the Arts and Science Center of Catawba Valley to more accurately reflect its tenants.

Information and photos provided by the Hickory Landmarks Society