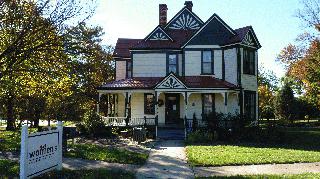 The former Corinth Reformed Church Parsonage is a two-story, German-sided, Queen Anne-style house with seven gables, built in 1895. Corinth Reformed Church had this house built at the southwest corner of Third Avenue and Third Street on land bought from Kenneth C. Menzies. Originally it was built for the minister, Dr. J.L. Murphy (1858-1917), who also served as president of Claremont Female College. From the time the parsonage was completed in 1895 until his death in 1917, Dr. Joseph Lorenzo Murphy and his family lived in this home. Having a magnetic personality and being one of the best pulpit orators in the state, Dr. Murphy was highly successful as a minister at Corinth. Interested in making Hickory a better place to live, Dr. Murphy strongly supported the improvement and expansion of Hickory’s public school system.

From January 1, 1918 until 1923, the parsonage was the home of Dr. Walter Whiteford Rowe. An eloquent speaker and brilliant theologian, Dr. Rowe received many honors from the Evangelical and Reformed Church. In 1930, he was president of the church’s Ohio Synod.

In 1924, this house was sold to Robert and Mattie Brown and moved to the northeastern corner of the lot. The Browns later sold this house to their next-door neighbors, Dr. Ralston W. Carver and his wife. Dr. Carver deeded this property to his daughter Martha Carver Barkley and his son-in-law William S. Barkley, who lived in this house until 1982. On December 31, 1985, the Barkleys donated the house to the current owner, the Hickory Landmarks Society who moved it to Ivey Arboretum and restored it. The parsonage is currently being rented to the non-profit Women’s Resource Center.