Within the parking lot of the Olde Hickory Station restaurant is a monument, constructed by the daughters of the American Revolution in 1954 to commemorate the site of the original Hickory tavern, from which the City of Hickory got its name. 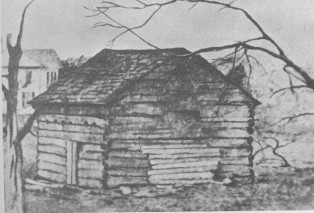 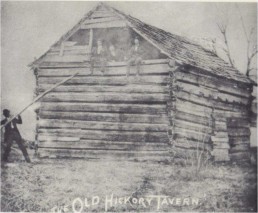 According to historian J.L. Latta, writing in the 1930’s, in the years before Hickory was founded the area “was then only a forest on what was then known as “Bolick’s Dry Ridge,” covered with oak and hickory.” The first road entered the area in 1769 and in 1784 John Bradburn was issued a license to operate an “ordinary” by the county court of Lincoln County. The ordinary came to be called Hickory Tavern and was the birthplace of the city.

A stage coach line ran between Salisbury and Morganton with a stop in the village of Hickory Tavern from 1859 until about 1870. The arrival of railroad passenger service caused the end of stagecoach services here.  The tavern, or ordinary, was a small log house, one and a half stories high. As historian Latta described, it had very few overnight guests, but its dining room and cuisine were famous, especially under the regime of “Old Joe Miller,” whose hospitality was “like the bubbling up of a spring that knew not the change of the seasons. The stages changed teams here and passengers took meals at the tavern.”

Once the business vacated, the log structure deteriorated rapidly and was last standing around 1875.

Information and photos provided by the Hickory Landmarks Society.