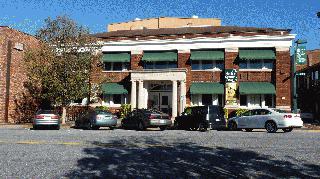 In 1919, seeing the need for a place where Hickory citizens could have conventions, lectures, and community gatherings, the Hickory City Council hired architect Charles Christian Hook to design this building. The City Council voted in 1920 to issue bonds for the construction of this municipal building and auditorium. Construction was supervised by city manager Rusk Griffin Henry. Dedication of this building was held on November 3, 1921. For its day, the Hickory Municipal building was an ambitious undertaking for a city the size of Hickory.

The building originally contained the city administrative offices, the council chamber, the fire department, the police department, the jail with a capacity for twenty-two prisoners, the water department, the city court, and an auditorium with a seating capacity of 1,160. It was the focal point for all city operations and activities. In 1977, all remaining city offices moved into the new city hall in 1987. Throughout the years, the auditorium has been the center of much of Hickory’s civic and cultural life. Band concerts, dance recitals, high school and grade school choral events, and amateur and professional theatrical productions have been held there. The auditorium also has been used as an opera house and a motion picture theater. Since 1949, the Hickory Community Theatre (HCT) has been a major tenant of the auditorium, and in 1979 the group took occupancy of the majority of the downstairs of offices and basement storage space. HCT became the sole occupant in 1987 after the Western Piedmont Council of Governments moved.

The Neo-Classical Revival styling of the exterior is continued in the main lobby where its original vaulted ceiling with corresponding paneled ribs, marble wainscot, and paneled pilasters continue to reflect its 1920s appearance. Doors at the east end of the lobby open into the auditorium which also remains well-preserved and essentially intact, despite the removal of a few, rear tiers of main-level seating and the insertion of a faux Victorian screen in 1962/1963 to create a small lobby area inside the auditorium. Original staircases on either side of the doors into the auditorium rise against the auditorium’s west wall, to the principal balcony. These wood staircases have paneled newels, shaped handrails, and square picket railing. The upper balcony, segregated for use by black citizens with no direct connection to the main floor and first balcony, and fitted with wood-pewlike benches, also survives nearly intact except for the removal of some seat lengths. It has not been used in the years since desegregation. The auditorium comprises nearly half of the building, and its survival to the present, together with its tiered balconies for white and black citizens, represents an important part of the integrity and significance of the building.